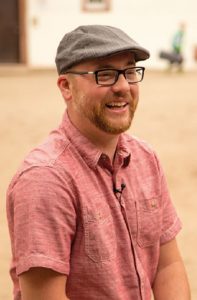 Two filmmakers from the Palatinate region in Southwest Germany looked for them and found them – the relatives in America. Around 400.000 people live there and not only speak an old form of the Palatine dialect, Pennsylvania (PA) Dutch, but also follow other Palatine habits such as eating pig stomach or hunting Elwetritsche. One of them is the Pennsylvanian-born author and musician Douglas “Doug” Madenford. In the film he explores traditions of Palatine culture “hiwwe wie driwwe”, here in Germany and there in the USA.

Producer and director Christian Schega: “After a very successful tour through cinemas in Southwest Germany, we are very much looking forward to present the film and meet people in the USA. Already during the research and shooting in America people have shown great interest on both sides of the Atlantic. We are very curious to see how the film will be received by the audience in the states.”

HIWWE WIE DRIWWE accompanies Douglas Madenford on a search for the roots of PA Dutch through his American homeland and through the Palatinate region in Germany. On this trip he meets a cook in America who prepares pig stomach and an instructor who teaches PA-Dutch. In Germany he meets the linguist Dr. Michael Werner, who has been working intensively with PA-Dutch for many years, and Christian “Chako” Habekost, who as a very known Palatine comedian.

Producer and director Benjamin Wagener: “When I first read about people speaking our home dialect in America, I could hardly believe it. I wanted to know more and after a lot of research I found out that there was no film about it either. We had to change that.”

About 300 years ago many people from the Palatinate region fled from political persecution as well as for economic reasons to the USA and settled mainly in and around Pennsylvania. They brought their language and culture to the “New World”. Both have survived to this day in large parts.

The documentary HIWWE WIE DRIWWE (90 minutes) is a search for traces of the Palatine language and culture – in Germany and America. The film will be presented with English subtitles. The America premiere is on June 18th 2019 at the German Consulate in New York. Afterwards the tour leads through various locations like Washington D.C., Clark (NJ), Staunton (VA), Philadelphia (PA), Lancaster (PA), Reading (PA), Hamburg (PA) and of course Kutztown (PA) at the Kutztown Folkfestival. The filmmakers will be present for discussions on all locations.

Background: The two Palatinate filmmakers Benjamin Wagener (direction, producing, camera, editing) and Christian Schega (direction and producing) have been working together on HIWWE WIE DRIWWE since 2015. In 2017 it was shot in the USA and Germany. The project was supported by the Kulturstiftung Rheinland-Pfalz, the Bezirksverband Pfalz, the Sparkassen Stiftung Germersheim-Kandel and numerous crowdfunders.

You are welcome to use the following elements as press material. More graphics and clips can be found at http://www.hiwwewiedriwwe.com/pressematerial/ . Ask us for the password (info@hiwwewiedriwwe.com).
Go to Top